Thirty-eight slides were developed for the three conferences. 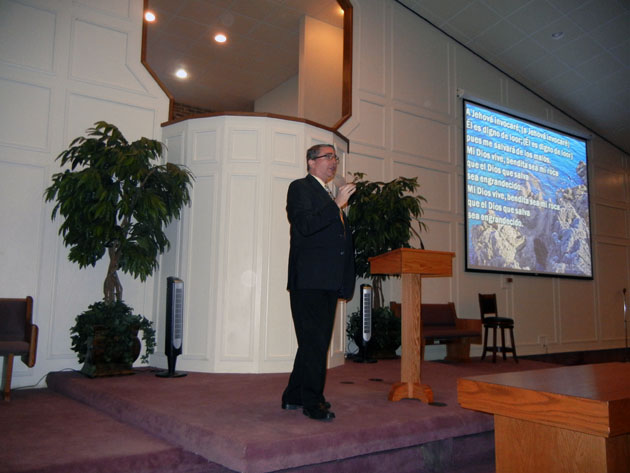 Antonio’s site of 172 hymns in Spanish, most in four-part harmony, continues to receive more than 13,500 visits monthly. www.alabanzas.info

During this month of July, we ordered 5,000 more business cards, with data for his site on one side and for www.editoriallapaz.org on the other. They have the same beautiful background image on both sides and are printed on heavy, gloss stock.

It took me the larger part of eight or nine days to develop the 38 slides for the conferences, based on ideas and notes I had developed before the trip to Florida on July 3. The challenge was to fit a large enough amount of information and graphics on the slides to make them really effective. Much appreciation was expressed for them, as well as for the content of the conferences.

High definition images of the slides for the first two conferences are now available on editoriallapaz. Those for the third conference will be added during this last week of July, Lord willing. 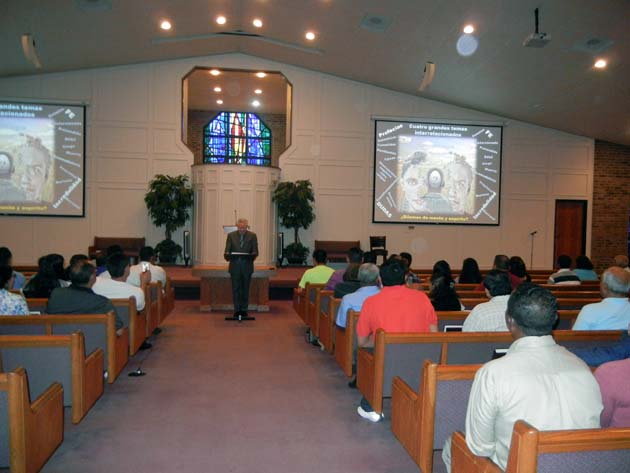 Dewayne Shappley is at the front, beginning the second conference of the series. The West Broward auditorium will seat about 450. Approximately 350 attend the English-speaking service on Sunday mornings. From 60 to 90 attend the Spanish-speaking service, which begins at 12:00 p. m. Images on the double screens, as seen within the auditorium, are very high quality. Justice is not done them in this photograph. I elected to stand down at the front on the level with the audience so that I might be in closer contact and be able to move about more easily. 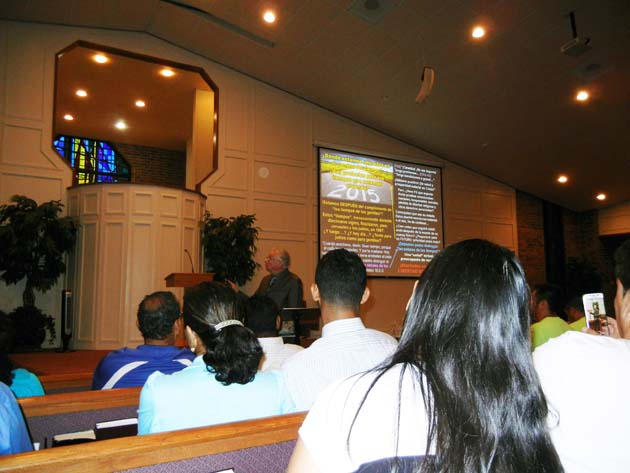 In this picture, I am looking toward the screen to my right, not visible in this picture. On the small podium, I had a notebook with printouts of the images. The half-round structure behind the main pulpit is the baptistery. 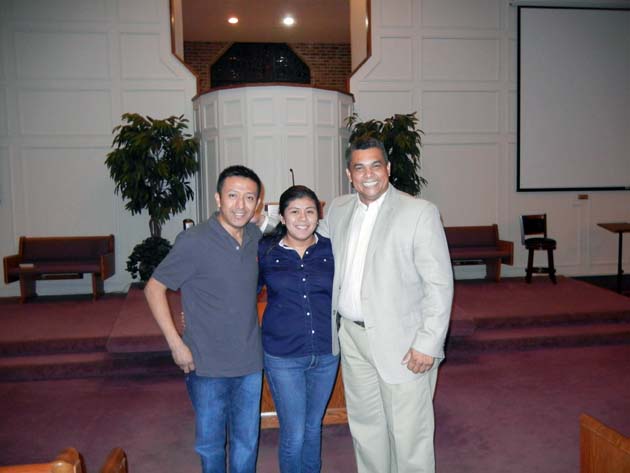 Friday night, July 17, Obilio Sebastián and his wife, Jésica, on the left, were baptized. On the right is Ulbert Romero, who does most of the preaching and teaching for the congregation. Obilio and Jésica were contacted through literature distribution in the area of the meeting place. Ulbert visited them in their home, studied with them and they began attending shortly before the meeting. 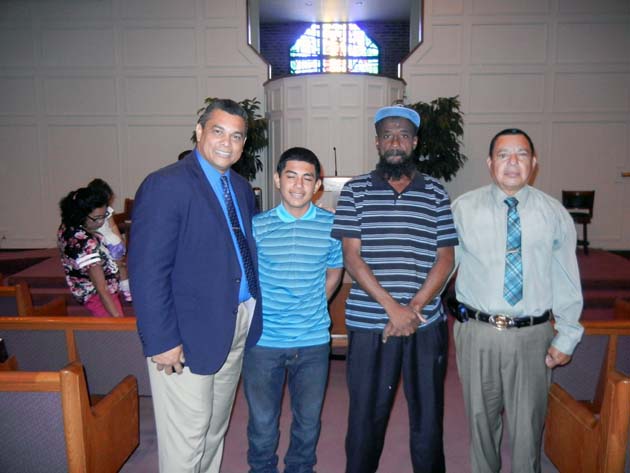 At the Sunday afternoon service, July 19, the young man to the right of Ulbert was baptized. The bearded man next to him was also baptized at the same time. As he told us later, he is from the Virgin Islands, and is homeless in his present condition. He had been hanging around the building for at least a week, or more. Bro. Luis Olivo, who is bilingual, talked with him and he decided to be baptized. As to his motivations, that he will demonstrate by his actions after being baptized.

On the right is Ricardo Solís. He was restored at the Saturday night, July 18, service after being away from the church for two years. Ricardo was present for the Sunday service of July 5. When I spoke to him that Sunday, he seemed depressed and withdrawn. After he was restored, his demeanor changed noticeably. He was smiling and conversing easily. Ricardo told me afterwards that he had stopped attending because of marital problems, adding that before becoming unfaithful he had preached some for different congregations in the South Florida area. 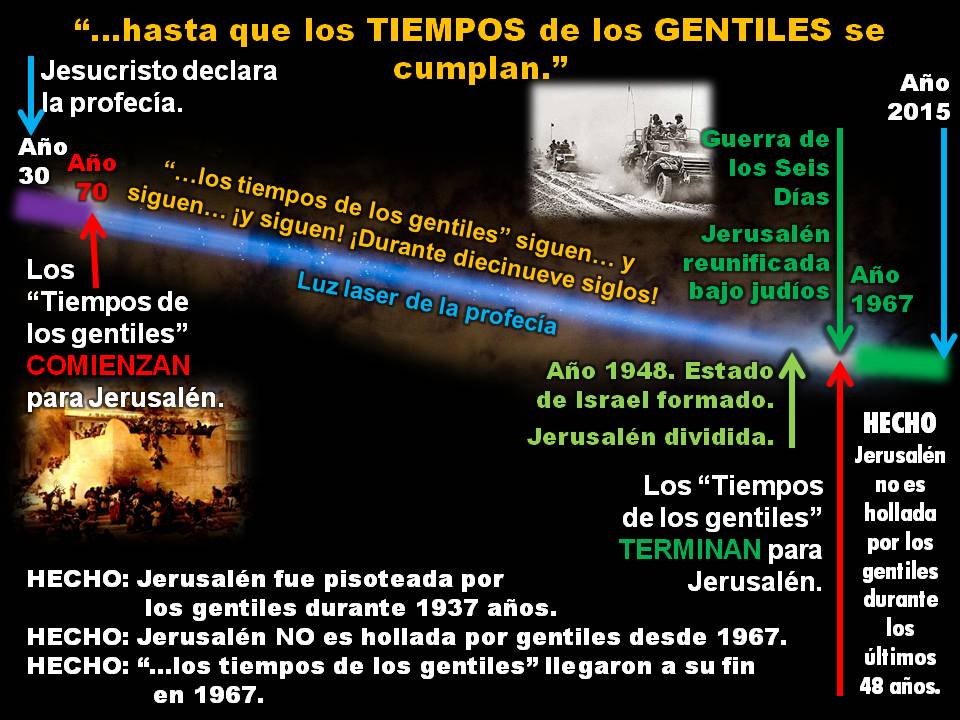 This is Slide 6 for the first conference. The general thrust of the conferences was to show how fulfilled prophecies, and prophecies presently being fulfilled, can shore up faith, dispel doubts and keep one from falling into the jaws of the hungry lioness “Incredulity.”

Highlighted in this particular slide is Christ’s prophecy about the earthly city of Jerusalem being trodden down by the Gentiles until the times of the Gentiles should be fulfilled (Luke 21:24). The prophecy began to be fulfilled in 70 a. d., when Gentile, Roman forces finally overcame, after three years of war, the defenses of Jerusalem, burning the city, with its magnificent temple. From there on, history records that the city was under the domination of Gentiles for long centuries. The “laser light of prophecy” shown through the centuries, though few would be aware of it, until it finally struck an event in June, 1967. In that month, Israel conquered eastern Jerusalem during the Six Day War, reuniting the city under Jewish rule from that time to the present. It is no longer trodden under foot by Gentiles. These are verifiable facts which prove the fulfillment of Christ’s prophecy. From them, all people, both Jews and Gentiles, and all within or without the church, should conclude that the prophetic Word of the Lord does not fail. “We have also a more sure word of prophecy; whereunto ye do well that ye take heed, as unto a light that shineth in a dark place, until the day dawn, and the day star arise in your hearts…” 2 Peter 1:19-21. Strong emphasis was placed on this text throughout the series.

This first conference began with the prophecy of Christ about not one stone of the temple being left in its place, with empirical evidence –a picture of the stones laying beside the Temple Mount foundation wall and a picture of the Roman emperor Titus’ Arch of Triumph, in Rome- showing its fulfillment. After the prophecy about Jerusalem and the Gentiles, the prophecy of Mark 9:1 regarding the Kingdom’s coming before the death of some listening to Jesus was presented and its fulfillment explained. Then, in conclusion, and as a pertinent basis for the invitation, the prophecy of Luke 21:25-27 was cited and applied. 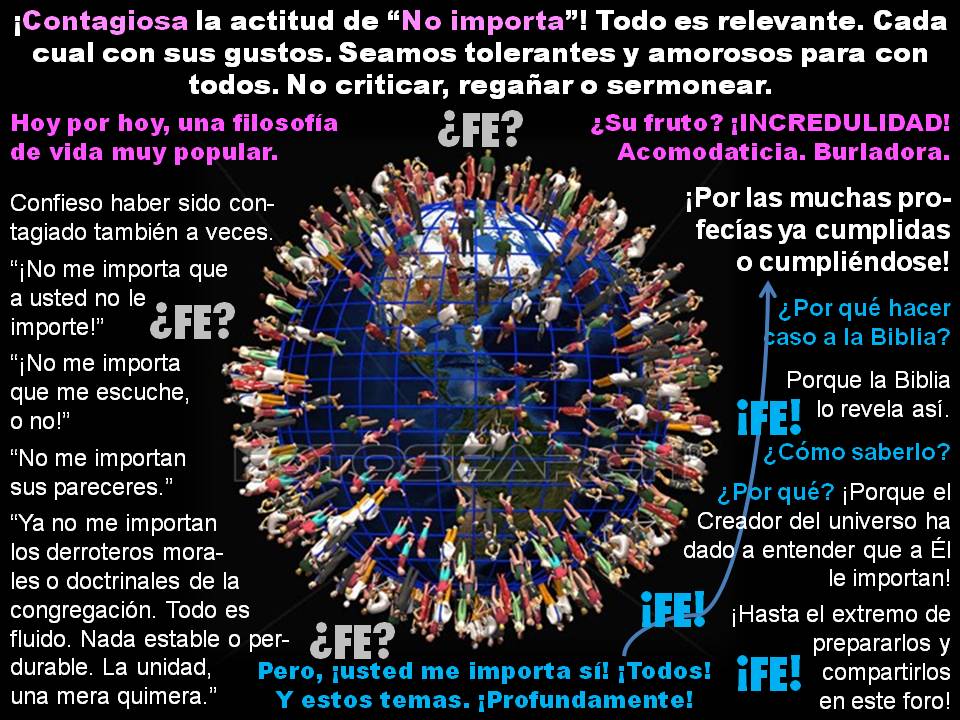 This is Slide 6 of the second conference. At this point in the lesson, we are talking about the Generations, or Cultures, of “It’s not important. Who cares?” Based on a statement by the actress Cate Blanchard, in an interview with Variety, with regard to her sexual orientation. After hesitating, she said: “In 2015, the point should be: Who cares?” We observe that this popular philosophy of life is very contagious. It can, and does, affect some Christians, even preachers. Faith cannot be strong where it reigns. Its fruit is Incredulity. Why I personally do care deeply about those before me and the message I am presenting is emphasized on the right of the above slide, following the arrow from the bottom up.

The prophecy highlighted in this second conference is 2 Timothy 3:1-9. We call special attention to the Generations, or Cultures, of the “Unnatural.” That which is against nature itself, and common sense. In times past, in the days of Lot, the generation of the cities of the Jordan River plain was guilty of “unnatural vices.” This is the translation of the Reina Valera Spanish version: “vicios contra naturaleza”; where the King James reads “strange flesh.” Some generations, first of Greece, and then of Rome, were also infamous for practicing the unnatural. The focus is then brought to bear on the new generations of modern times, multitudes of whose members are heavily into the unnatural, boldly calling what they do “natural.” Several examples are given.

At the beginning of this second conference, we spoke of serious threats to our personal rights, especially to religious liberty, citing especially the case of Annise Parker, mayor of Houston, Texas for six years (she has a “wife” in case you do not know), who tried, backed by city officials, to legally force five preachers to hand over any sermon, any written note, any e-mail, having to do with sexual orientation. Such was the public outcry that she and the officials behind her had to withdraw their subpoenas. These developments were placed within the context of the “signs of the times” which we should be able to discern, according to Jesus Christ and the teachings of the Holy Spirit in texts such as 1 Thessalonians 5:1-5.

Leading up to the invitation, we turn to the very positive: The beauty, wholesomeness and uplifting of the Normal, the Natural, that which is well ordered, well organized; of living in harmony with nature, in consonance with God’s noble designs for the human race. Of having deep roots in what is good. Emotional, mental and spiritual stability in the present. The certainty, the conviction, of a glorious future. 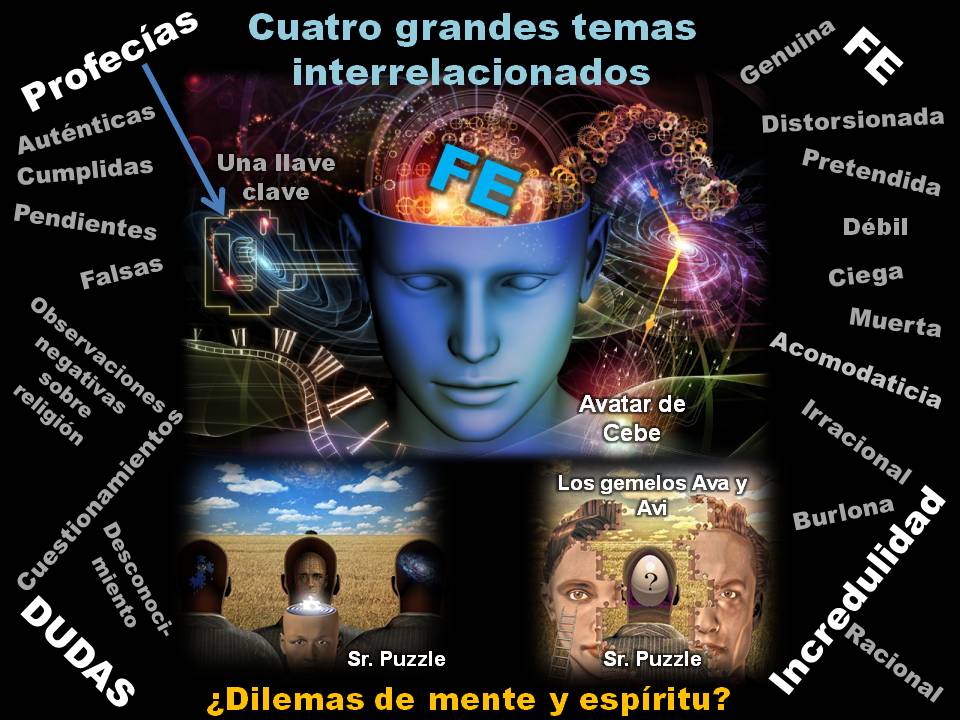 This is the introductory slide to the third conference of the series “Four Great, Interconnected Subjects: Prophecies, Faith, Doubts and Incredulity,” with different kinds of each noted. For example: Authentic prophecies, Fulfilled prophecies, Prophecies pending fulfillment and False prophecies. Fictitious characters are used at the beginning of each conference to illustrate the quandaries of many who strive to solve the puzzle of their lives. “Prophecies” are an important key, especially those fulfilled or being fulfilled.

The prophecies in 1 Timothy 4:1-5 and 2 Timothy 4:3-4 are presented, with present day examples showing how they are fulfilled. Interestingly, two cases of religious scandals causing people to lose their faith and others to say they will never become members of a church, though they believe in God, while still others scoff at God and all churches, have occurred in South Florida, one last year and one in June of this year. The first is of Bob Coy, founder and pastor of one of the largest mega churches in the US, the Calvary Chapel of Fort Lauderdale, with 20,000 members. Confronted, he admitted to adultery with several women and a long standing obsession with pornography. He resigned. The other is of Tullian Tchividjian, grandson of Billy Graham. Named pastor, while still a comparatively young man, of the Presbyterian Church of Coral Springs, a mega congregation with 2,000 members, in June of this year he confessed to adultery and stepped down. We compare present day models of church organization with God’s New Testament model to highlight some of the underlying causes that open doors to such tremendous scandals. For example, the independent Calvary Chapel churches -1,500 of them in the US- follow the “Moses Model.” The pastor’s word is law, and he is not to be challenged. It is absolutely shocking to read what other pastors in that system have done.

I shall refrain from presenting more of the body of the third conference. Again, leading up to the invitation, we turn to the positive, presenting prophecies which pinpoint some of the “all things NEW” that the obedient and faithful will receive.