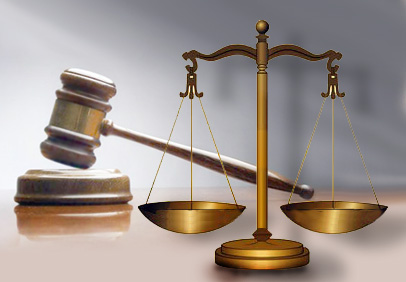 Do you love and support JUSTICE? If it is not important to you, if you ignore it in your daily dealings, if you are known, even by your family and people on the street, as “UNJUST, HARD and SOULLESS,” though you may not receive your just deserts in this life, true justice, impartial and irrevocable, will be applied to you after your DEATH! Unless you repent in time.

Do you laugh and deride? Do you think yourself more a devil that Satan himself? Even the devils fear and tremble when they contemplate their coming JUST JUDGMENT.

Don’t believe in devils, angels, God or a just judgment? For rebellious people of such an obtuse, even depraved mentality, physical death comes up short as just punishment. A just judgment requires sentences in proportion to facts and intensions. Thus, “the JUDGMENT” of the SOUL-SPIRIT (Hebrews 9:27), after physical death, the punishment being “the SECOND DEATH.” This seems very just to the soul that truly loves JUSTICE.

Adolf Hitler, Heinrich Himmler (Head of the SS and Gestapo, responsible for the deaths of some 14 million civilians) and the thousands of politicians, military, philosophers, sociologists, police, professors and engineers who were one with them, caused enormous wars in the 20th century and carried out genocides, pogroms and banishments that resulted in the violent death of tens of millions of soldiers, women, children, young people and old, including six million Jews. Prisons, the death penalty, suicide or natural death would be, for the guilty, like two or three light lashes in comparison with their monstrous crimes. Of such great magnitude that the mind of the decent and just human being finds it impossible to form even a small realistic picture of what took place.

But, God knows everything those megalomaniacs did, with their hordes of accursed henchmen, and he will make them stand before him and the multitudes of their accusers.

The sentence to be dictated is found in the New Law of the Kingdom of God, but neither just nor unjust will comprehend the seriousness and finality of it until they are in the future scenario (perhaps near) of the Judgment of the Great White Throne (Revelation 20:12-15).

“They shall suffer the punishment of eternal destruction and exclusion from the presence of the Lord and from the glory of his might” (2 Thessalonians 1:9). They will be “thrown into the lake of fire.”

This is the “SECOND DEATH.” This is the “righteous judgment of God” on the soul-spirit of Hitler and his evil coreligionists, Joseph Stalin and his, Pol Pot and his (responsible for the Cambodian genocide), and all other “world rulers of this present darkness,” as well as that of all times and places.

Hundreds of millions of souls-spirits of human beings killed unjustly and cruelly cry out for “JUSTICE! JUSTICE!” Only God can respond to their reclamation. He will do it, unfailingly, “on the day of wrath when God’s righteous judgment will be revealed” (Romans 2:5).

The sentences of the earthly International Criminal Court against people guilty of genocide, war, torture, violent exploitation and other crimes against humanity, do not satisfy the ardent desire for true justice of the masses of oppressed and martyred. Only the Celestial Court has the power to reach beyond physical death and impose true justice on evil, unrepentant souls and their resurrected bodies (made spiritual, but not glorified. John 5:26-29; Revelation 20:11-15).

Having begun with the most evil ones in the tragic “List of culprits with citations to appear in the Celestial Supreme Court,” who would be NEXT? Among probable candidates: Drug lords, together with their dealers throughout the world, for being destroyers of countless lives and souls of young and old who become addicts. Practitioners of abortions. Traffickers in women, sex and pornography. Traffickers in slaves. Mafiosos.

NEXT? Some candidates would be the instigators and administrators of the Holly Inquisition, with their sadistic tortures and murders of hordes of “heretics.” Popes, cardinals, bishops and executioners. And the fanatical religious of all times and places who have maimed or assassinated hundreds of millions of dissidents.

“The souls” of martyrs cry out with “a great voice… O… Lord, how long before… thou wilt judge and avenge our blood…?” Wait “a little longer,” they are told, and justice will be done (Revelation 6:9-11). “AMEN,” shout the lovers of justice: “Just punishment for religious criminals!”

NEXT? Scientists, philosophers and teachers who reduce humans to the status of animals without souls. Darwinist evolutionists, humanists and other ATHEISTS. Coldly irreligious, mocking, narcissistic secularists. Social engineers who promote life styles contrary to nature. Destroyers of an infinite number of souls who suffer little or no punishment here for their horrendous spiritual crimes. But, they will NOT ESCAPE the just judgment of God!

NEXT? “WAIT! Enough already!” You may exclaim. But, the picture of the “Day of the righteous judgment of God” would be incomplete, justification for it not fully established, and the proper identification of other culprits left out.

For example: “the cowardly…  unbelieving… polluted… murderers… fornicators… sorcerers… idolaters and all liars” who die without repenting. They suffer the “second death” (Revelation 21:8).

WRATH and FURY on “…men who by their wickedness suppress the truth … filled with all manner of… evil, covetousness, malice… envy, murder, strife, deceit, malignity, they are… haters of God… who are factious and do not obey the truth, but obey wickedness” (Romans 1:18, 29; 2:8).

On “…scribes and Pharisees, hypocrites… full of extortion and rapacity” (Matthew 23:25).

“…condemned” all “who did not believe the truth but had pleasure in unrighteousness” (2 Thessalonians 2:12).

“…he who does wrong will be repaid for what he has done” (Colossians 3:25). Including false prophets with their false signs. The Supreme Justice will say to them: “I never knew you; depart from Me, you who practice lawlessness!” (Matthew 7:21-23).

And the covetous, judaizing pastors whose “judgment has not been idle, and their destruction does not slumber” (2 Peter 2:1-3).

Many of those cited have “lived on the earth in pleasure and luxury.” Have “condemned” and “murdered the just.” Have deceived and robbed laborers, whose “cries” “have reached the ears of the Lord.” “…weep and howl for your miseries that are coming upon you,” oppressors and exploiters, in the “Day of the righteous judgment of God”.

“For judgment is without mercy to the one who has shown no mercy. Mercy triumphs over judgment” (James 2:13).

GREAT NEWS for the innumerable victims of the harsh, impenitent unjust: True justice will be justly applied in the Celestial Court!

This event confirms the existence of the living and just God just as He is revealed in the Bible. If it did not take place, justice would be forever greatly and bitterly frustrated!

He who hears His Word and believes, obeying it by repenting and being baptized “for the forgiveness of sins” (Acts 2:37-47), remaining faithful to death, “shall not come into judgment, but has passed from death into life” (John 5:24).

In the “new earth,” where “RIGHTEOUSNESS DWELLS,” he will enjoy this blessing eternally! (2 Peter 3:13).

PDF of “Justice After Death.” To print 2 tracts per letter-size sheet.

TRACTS in English available on this Web